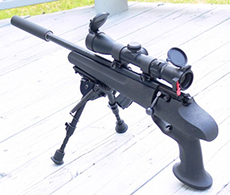 Have fun trying to look down that scope.
"Your handgun can shoot accurately enough to pierce someone's nipple from across town."
— Yahtzee, in his review of Saints Row 2
Advertisement:

In the wonderful world of video games, you can take out a target at a thousand yards using your pistol when your sniper rifle runs out of ammo. Sometimes it's possible to pre-aim with a sniper scope, switch weapons to a pistol, and deal out the same damage.

In many cases, this is due to accuracy being determined by recoil, along with no realistic damage/bullet drop. Rather than have the bullets deviate from the cross-hair, the weapon always shoots where it is aimed, but each shot causes your aim to shift. Therefore, carefully lining up the first shot always results in a hit, even if the subsequent shots go wide. Weapons with low damage but high firing rates, such as machine guns, will therefore be hard to aim accurately, while slower firing and more powerful single shot weapons, such as pistols, will be more effective at range so long as you take the time to line up each shot. It's often possible to get the same effect from an automatic if it has the option to switch to single-shot mode (or sometimes it will have the exact same accuracy, which makes even less sense). This is likely a way to work around the limitations of hitscan. As well, in many situations a headshot is a headshot no matter what the bullet was fired from, so a fast-firing pistol with lots of ammo is favourable next to a slow-loading sniper rifle with a handful of shots. The extreme version of this is when the pistol is not only as accurate as a sniper rifle at long range, it's as strong as one too.

In Real Life, accurately shooting a handgun at longer ranges, regardless which type of scope is used, is incredibly difficult and takes a lot of training to master, much more compared to a rifle. Getting any kind of grouping on a target set beyond 100 yards can prove really tough to accomplish.

Additionally, ranges are extremely compressed in Video Games. In real life, the effective range for the average 9mm or .45 ACP pistol is up to 100 yards, whereas even a small caliber assault rifle reaches 400-500 yards easily, not to count designated marksman rifles which hit 600 yards or true sniper rifles, which pass 2000 yards.

The ability to shoot at long range with a handgun can be heavily influenced by its caliber, as fast and flat shooting pistol calibers do much better at far distances than slow calibers.