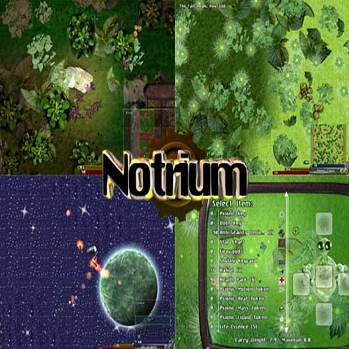 You're an intrepid space captain, one of the last humans left, exploring the galaxy.
Advertisement:

You're an android warp engineer, having secretly modified yourself to achieve sentience.

You're the ship's medical officer, a powerful psychic alien of an unknown race.

You're an Alien stowed away in the ventilation systems.

Whatever you were, now you've crashlanded on the planet of Notrium, shot down by a mysterious automated missile defense system.

Notrium is a Freeware Survival Sandbox game for PC by Ville Mönkkönen, first released in 2003. There, the player must gather food, fight off hostile alien predators, and survive the freezing cold nights, all whilst trying to gather the scattered remains of technology from your destroyed spaceship to cobble together something to defend yourself with.

Will you repair your escape pod and flee the planet? Send a distress beacon for help? Or will you discover the secrets of planet Notrium?

The game can be downloaded from its official website here

, along with a couple mods that add functionality to the game. In 2015, the game received a commercial Special Surprise Edition on Steam.