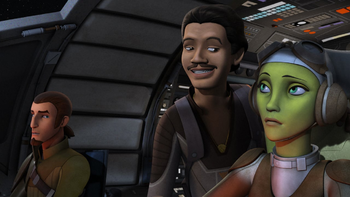 Lando: You know, you remind me of a droid I once knew…
Due to Zeb getting in over his head during a sabacc game, the Ghost crew is forced into working for their new acquaintance, Lando Calrissian. Mainly, Lando intends to begin a mining operation on Lothal and is using the crew to help get it started. However, a complication arises in the form of a crime lord called Azmorigan.