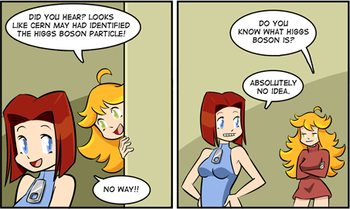 A character (often The Ditz) encounters a word or phrase, and makes some comment expressing what he thinks about the thing the word refers to — just before revealing that actually, he doesn't know the word at all. ("Lorem Ipsum is terrible! By the way, what's Lorem Ipsum?")

If the character doesn't outright imply that he knows what the thing is, but is willing to venture a guess, that guess will likely be Is It Something You Eat? While that trope overlaps with this one, it generally involves an honest uncertainty, while this one is about dishonest certainty ("Of course I know that gazebos are something you eat.")

The thing in question just might turn out to be a Henway.

This trope is usually used in preschool shows in order to present to the target audience a new word or concept by making the ignorant character an Audience Surrogate for them.

Sub-Trope of Feigning Intelligence, although the feigning is usually quite brief before the character admits she really doesn't know what she's talking about. Not to be confused with Malaproper, which is when the character misuses words without knowing that he don't know what the words mean (honest, but false, certainty). Completing the quadrangle is Obfuscating Stupidity, which is dishonest uncertainty/ignorance. Related and often a Super-Trope to Calling Me a Logarithm, which is where someone takes offense to a word they don't know the meaning of, with or without pretending to know what it means. Also compare Scary Science Words for when someone is afraid of a technical word, and, again, may or may not pretend to know the meaning.

Trope namer. Patrick doesn't understand the concept of "Opposite Day", so SpongeBob shows him.

Trope namer. Patrick doesn't understand the concept of "Opposite Day", so SpongeBob shows him.