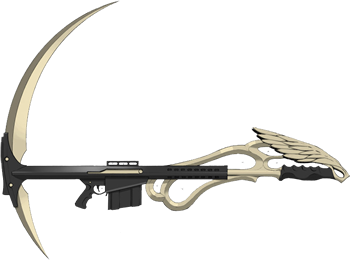 Half-scythe, half-rifle, all awesome.
Jaune: Whoa! Is that a scythe?
Ruby: It's also a customizable high-impact sniper rifle!
Jaune: A-what?
Ruby: It's also a gun.
— RWBY, describing Crescent Rose and setting the stage for basically every other weapon in the series
Advertisement:

Two (or more) weapons share the same body, allowing either to be used at any time.

Sometimes, when you combine two weapons, you get something with a completely new set of properties — like combining a gun and a sword into a gun that shoots swords. Or you might get a more traditional Swiss Army Weapon — for instance, a gun that can turn into a sword. But the rest of the time, you get a Mix-and-Match Weapon — two weapons combined that retain the uses and elements of both. The classic example is a bayonet, which is nothing more than a knife strapped to a rifle, creating a weapon that can shoot or stab at will. Compare Bifurcated Weapon, contrast Morph Weapon.