This Banana is Armed 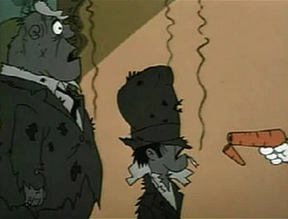 An ineffectual character shows up with an ineffectual "weapon", usually something that's not a weapon at all. Har har har! He's without a chance— wait a minute, turns out that this weapon is really dangerous! Related to Improbable Weapon User and Improvised Weapon. Sometimes used as an end to an apparent Brandishment Bluff.

Can be done with a Finger Gun, especially if the user has Finger Firearms. Compare Happy Fun Ball, Lethal Joke Item, Nerf Arm, Hidden Weapons and Shoe Phone. Supertrope to Sword Cane (hiding a sword in a seemingly normal stick), Senseless Violins (hiding weapons in seemingly innocuous instrument case) and Instrument of Murder (hiding weapons in instruments that are activated when it's played). Can overlap with Edible Bludgeon if an actual banana or other food is used.

Has nothing to do with talking bananas that have arms. That's Anthropomorphic Food.

The Banana Bomb as demonstrated in Worms Ultimate Mayhem. The sillier the weapon, the more damage it does.

The Banana Bomb as demonstrated in Worms Ultimate Mayhem. The sillier the weapon, the more damage it does.