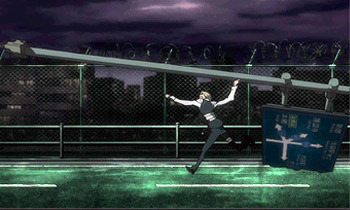 Steroid use in track and field athletes has gotten out of control.
Straight line of the year: "Face me, Hulk," says Hercules in Hulk #404, "Without benefit of shrubbery!" There's only one correct response to THAT challenge: Ni!
— Marvel Year In Review 1993

The use of extremely long and thick objects as blunt weaponry carried one-handed over the shoulder but swung two-handed in a devastating arc: think telephone poles, street lamps, trees, cabers...

Usually an indicator that the wielder has Super Strength.

Pretty much a combination of Batter Up! and BFS; subtrope of the former.

Some overlap with Improvised Weapon.

Street Weapons Lvl.3 involves Mike pulling out a street lamp and using it to whack the machine.

Street Weapons Lvl.3 involves Mike pulling out a street lamp and using it to whack the machine.