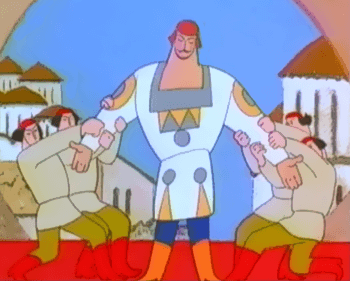 The freakishly powerful One-Man Army can be an absolute terror for the average Mook on the battlefield, and even those higher up the chain have trouble dealing with them in even the best of circumstances. But, more often than not, killing the One-Man Army from a distance isn't on the table, either because there isn't a weapon capable of doing so, they're incredibly difficult to kill regardless, or they're needed alive. In a best-case scenario, the only option they have is to get as many people as they can to hold the One-Man Army down.

If tearing skyscrapers to shreds or literally taking on entire armies alone isn't happening, this is often the best way to communicate just how strong and dangerous the one being held down is. And usually everyone involved will be physically straining themselves, whether they're the ones doing the restraining, or the one being restrained. Rarely though, will the restrained remain so, especially if they're the Big Bad. In such cases, the inevitable breakout will signal the start of the work's Darkest Hour. If it's the Hero, there's probably a Moment of Awesome just seconds away. And in both cases, possibly a Roaring Rampage of Revenge.

This trope can also apply if beasts, usually large and/or borderline Kaiju-sized, are the ones being restrained. Nor is this trope restricted to just ten people doing the holding down, rather, any number can be involved so long as it constitutes as a group.

Sister trope to Let Me at Him! and The Strength of Ten Men.

Due to the spoileriffic nature of this trope, beware of unmarked spoilers below!