This article assumes you have played... almost every The Legend of Zelda game prior to Breath of the Wild and spoilers are unmarked for those games. 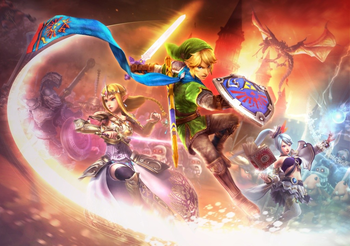 The Legend goes to war.
Advertisement:

Hyrule Warriors (known as ゼルダ無双 Zelda Musou in Japanese), is a Spin-Off of The Legend of Zelda produced by Nintendo in collaboration with Koei Tecmo, and developed by Dynasty Warriors developer Omega Force, with some help from Ninja Gaiden developer Team Ninja. Announced by Nintendo during a Nintendo Direct on December 18th, 2013, it takes the gameplay of Dynasty Warriors and gives it a Zelda theme. It was released for the Wii U on August 14th, 2014 in Japan, on September 19 in Europe, and on September 26 in North America.

Generations ago, Hyrule almost fell into a state of chaos, but a hero clad in green saved the day. The hero separated the evil force into four pieces, with one piece sealed away by the Master Sword and the three other pieces sent into the depths of the space-time continuum in hopes this would prevent any possible return. Ever since then, a sorceress has watched equilibrium of the Triforce through a special crystal. Now, the delicate balance of the Triforce has been disrupted. Cia, the sorceress of this generation, developed feelings for a young knight trainee named Link, but those feelings turned into jealousy when she saw his close relationship with Zelda, the princess of Hyrule. Her jealousy made her succumb to the dark power that she was supposed to watch over, and her spirit was corrupted. Now, Hyrule Kingdom is once again being torn apart by the dark power unleashed by Cia.

The game received several DLC packs over the six months following release. Each DLC came with new maps, new weapons, and three of them with new characters and new gameplay modes. One pack is based on Twilight Princess and includes Midna's true form, whereas another is based on Majora's Mask and adds Young Link and Tingle to the roster. It also has functionality with Nintendo's amiibo figure line, with the Link Super Smash Bros. figure unlocking a Spinner weapon and all figures (including Link's, once the Spinner is unlocked) granting random items (with Zelda series characters - which includes those from the Super Smash Bros series and the Wolf Link amiibo that comes with Twilight Princess HD - giving better items than the others).

June 10 of 2015 brought the announcement of a 3DS version

titled Hyrule Warriors Legends that seems more or less the same... Except for the additions of a slew of Wind Waker content, including a Wind Waker-focused storyline, new stages, enemies, and bosses, and the addition of Tetra and King Daphnes as playable characters. Later announcements revealed the inclusion of Toon Link, Skull Kid, and the newly introduced Linkle to the roster, as well as the ability to switch between other allied commanders on the map. It was released in Japan on January 21st of 2016, 24th of March for the UK, and the US on March 25th. The new characters and weapons (but not any of the other new features) were also made available within the Wii U edition, as either a paid download or as a free bonus available with the purchase of Legends.

Legends also received a wave of DLC itself, announced prior to its international release. The first pack is a "Master Quest" of Wind Waker, whereas the latter three are based on Link's Awakening, the DS games Phantom Hourglass and Spirit Tracks, and A Link Between Worlds. Each pack includes new characters, weapons, and Adventure Mode maps. The new characters are Marin, Toon Zelda from Spirit Tracks, Ravio and Yuga. Again, the new characters and weapons can also be purchased on the Wii U version.

Finally, on May 18 of 2018, the Nintendo Switch port known as Hyrule Warriors: Definitive Edition was released, containing every piece of content from both the Wii U and 3DS versions, extra costumes for Link and Zelda patterned after their Breath of the Wild incarnations, and general visual and gameplay improvements thanks to the Switch's technology.

On September 8, 2020, Hyrule Warriors: Age of Calamity was announced for the Nintendo Switch; a Prequel set 100 years before the events of The Legend of Zelda: Breath of the Wild, during the war against Calamity Ganon, featuring the Breath of the Wild incarnations of Link and Zelda, Mipha, Daruk, Urbosa, and Revali as playable characters. It released November 20, 2020.