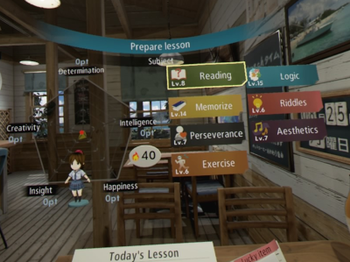 Raising Sims consist of applying schedules for a game to process, which in turn affects characters in the game, who then develop "on their own" without constant user interference. In this case the character can be a city or population, where it's often referred to as a "God Game". Populous is remembered fondly by this term.

Other times the target being raised is a single character such as a pet or monster. The player determines what actions are relevant for building what stats, with multiple potential end products, often to be pitted against players.

Occasionally it's a human being being raised to adulthood to be a good adult — or for other sketchy purposes — and the endings are concerned with multiple variations of futures.

Games where you hold a person's life in your hands! Figuratively.

There are so many of these in Japan, they've been documented here

Games where the individual people are de-emphasized, and you instead raise communities of people, generally by changing the environment they live in.

Sonic Adventure introduced the Chao Gardens, a raising sim where you take care of little creatures known as Chao. Here we see a Chao being fed by Sonic.

Sonic Adventure introduced the Chao Gardens, a raising sim where you take care of little creatures known as Chao. Here we see a Chao being fed by Sonic.