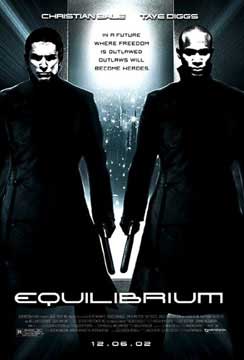 "So we have created a new arm of the law: the Grammaton Cleric, whose sole task it is to seek out and eradicate the true source of man's inhumanity to man: his ability to feel."
— Father
Advertisement:

Equilibrium is a Science Fiction action film inspired by many previous works of dystopian fiction (particularly 1984, We, The Giver, Brave New World, Fahrenheit 451, and The Matrix). Also the film that defined the trope of Gun Kata.

After a Third World War devastates the Earth, the totalitarian state left in its wake (Libria) comes to consider human emotion as the root cause of all conflict. Libria subsequently bans all emotionally stimulating material (e.g. art, books and music); any "sense offenders" caught by the police end up sentenced to death by incineration. The government also requires citizens to take daily injections of an emotion-suppressing drug in order to prevent "sense offense".

The governing body of Libria — the Tetragrammaton Council — uses the police to maintain conformity; the high-ranking Grammaton Clerics, trained in the martial art of Gun Kata, frequently carry out raids where they destroy both "sense offenders" and any offending materials found with them. A pre-Batman Christian Bale plays the role of John Preston, a highly-regarded Cleric who accidentally fails to take a dose of his emotion-suppressing drugs and ends up feeling emotions — which attracts the attention of the other Clerics and the Council's leader, the all-powerful "Father".

This film has a character sheet.