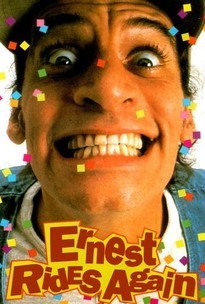 On a cannon, to be specific!
Ernest Rides Again is a 1993 comedy film written and directed by John R. Cherry III and starring Jim Varney, Ron James and Linda Kash. It opens with the song "There Once Was A Man Named Worrell". It is the sixth film to feature the character Ernest P. Worrell, and the last to be released theatrically.
Advertisement:

After fiddling around on a construction site one day with his metal detector (and accidentally causing the site to collapse, because it's Ernest), he finds a rare artifact in the dirt. He immediately takes it to his friend at the local university, Dr. Abner Melon, whose theory is that the crown jewels of England are fakes, and that the real crown jewels were hidden in a cannon ("Goliath") during the Revolutionary War. To Dr. Melon's surprise, Ernest's find supports his theory.

Dr. Melon and Ernest set out to dig up some new evidence, and their search for Goliath turns into a big adventure that attracts other interested parties - power-hungry colleague Dr. Glencliff, Abner's chatty, self-centered wife Nan, members of British Intelligence, and, for some reason, two vacuum salesmen.

The film is preceded by a Mr. Bill short, Mr. Bill Goes To Washington.