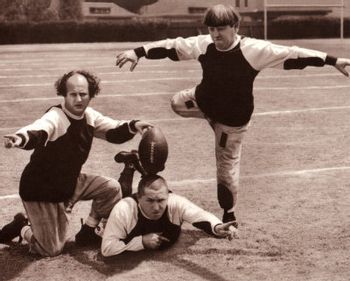 What Could Possibly Go Wrong?
Kevyn: Define "funny."
Doctor Bunnigus: When it happens to you, rather than happening to me?
Kevyn: So... My bloodstream is full of slapstick.
— Schlock Mercenary
Advertisement:

Slapstick is the essence of physical comedy — people getting hurt or embarrassed in hilarious ways (e.g. slipping and landing face first in dog crap). The defining feature of slapstick is its highly exaggerated nature, combined with a lack of serious physical consequences. The Pratfall is a staple of slapstick humor.

The name comes from a prop in the Commedia dell'Arte: the battacchio, or "Slap Stick", is two pieces of wood that sound more like punching than punching does, without causing any physical damage; making this Older Than Steam. It has been a staple of Vaudeville and Burlesque; and a consistent thread in many types of comedy, most notably the Farce. Exemplified in the modern era by artists like Charlie Chaplin, Buster Keaton, and Laurel and Hardy; and continued by recent performers such as the British comedy team of Rik Mayall and Ade Edmonson, and Canadian actor Jim Carrey.

While slapstick is present to some degree in many comedic works, examples should be works that depend entirely or predominantly on this form of exaggerated physical comedy for their humour.

An interesting bit of neurological trivia: finding slapstick funny is very deeply seated in the brain. A study was done of patients who had previously sustained head trauma who were shown comedy clips of varying types. It was found that while many had lost the capacity to "get" puns and higher humor, almost all still found slapstick funny. So while some people still complain that a show like America's Funniest Home Videos where people repeatedly fall and get hit in the crotch is not amusing, it's not really surprising that the show still continues to be popular across all demographics for well over 20 years even in the face of the infinite spring of funny home videos that are modern social networks.