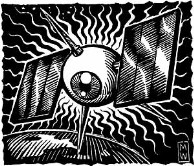 I See London, I See France - and yes, I can see your underpants.
I am the eye in the sky
Looking at you
I can read your mind
— The Alan Parsons Project, "Eye in the Sky"
Advertisement:

Much-beloved of the Spy Drama and a technical element that they most frequently get wrong, the omnipresent "eye-in-the-sky" is always shown to be a whole lot more useful than it truly is.

Satellite views are usually shown to be immune to clouds, 100 percent reliable, always available, and seem to be right over the target just when they are needed. The biggest error, however, is showing a live fixed video feed from orbit.

It is important to separate satellites into two main categories: LEO (low earth orbit) and GEO (geosynchronous earth orbit). The GEO satellites are able to stay over one location indefinitely, but cannot be used for spying purposes; their extreme altitude means that the image resolution would be too low to be useful. GEO satellites are used for communication and meteorological purposes. LEO satellites, on the other hand, are capable of capturing detailed images, but move so fast that they cannot keep a constant watch on a location, often circling the Earth several times a day. Furthermore, they are extremely vulnerable to cloud cover and smokescreens. The only ones that aren't affected by this are the ones equipped with Synthetic Aperture Radars, but they can only see metallic objects. Which does mean, incidentally, that they are very good for spying on tank formations.

Consider the fact that most spy satellites orbit around 200 miles or so above the ground. This means that it has to travel at just below five miles per second to stay in orbit. The amount of live feed you can get, therefore, is next to zero and you'll have to have the satellite rotating to do it. Slanting will occur very rapidly. If you want to hold a satellite over a place for any major length of time, you need to put it into geostationary orbit (22,240 miles over the equator) or an elliptical 'Molniya-style' orbit. Any images will be uselessly slanted, unless you happen to want good shots of Ecuador and have a really powerful zoom lens. Essentially, this is one of the many sub-tropes of Artistic License – Space.

Data processing also consumes a certain amount of time. Nobody should be, on the fly, searching footage of a city for a specific license plate, for example.

If the live satellite feed looks just like recycled footage from earlier in the episode, then it's a Magical Security Cam.

It should also be pointed out that according to the International Institute for Strategic Studies' 2007 Military Balance, the US only has three visual satellites in orbit.

When done in the modern context with UAVs, it is far more justifiable since they can be redirected much more quickly to where the operator wants the camera to be pointed.