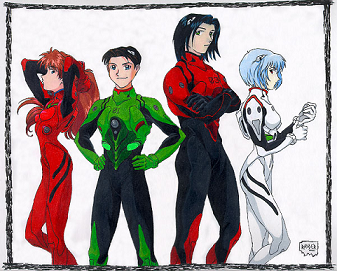 "But what the hell d'you need -me- for?" [DJ Croft] asked, running a hand over his thick black thatch of hair. "I mean, granted, I -am- the world's most handsome and sophisticated fourteen-year-old boy, but what good is that to NERV?"
Advertisement:

is a Neon Genesis Evangelion Fan Fic by the good people at Eyrie Productions Unlimited. It is an Alternate Continuity fic where Shinji, the Third Child, ran away after watching Eva-00's disastrous synchronization test, so they bring in the Fifth Child, the son of Lara Croft and Fox Mulder, Derek Joshua "DJ" Croft.

While not a Script Fic, NXE is structured to simulate the episodic format of a TV series; it is broken down into three "seasons" of nine "episodes" each: The Gathering Storm, Balance of Terror, and Revelations in Real Time. The third season ends on a cliffhanging sequence, which left the story unresolved for several years of real time until EPU released a final installment called Neon Exodus Evangelion The Motion Picture: Apotheosis Now. This novel-length story caps the entire series with a suitably epic-level conclusion that fulfills all the potential exhibited by the previous 27 chapters. Starting in the third season it also includes the infamous Bonus Theater segments, which showcase short humorous pieces, bizarre Spin-Off ideas and lighter, often Fourth Wall-breaking, views "behind the scenes" of the production.

As of March 2016, the series is being continued, with even more crossovers.

As a Mega Crossover series, NXE contains elements from or references to — at the minimum — the following works: