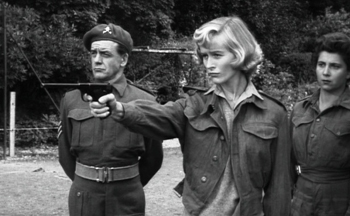 in Carve Her Name with Pride
Homer: Marge, I think that guy's a spy!
Marge: Of course he's a spy! We just saw him go through spy school!
— The Simpsons, "Colonel Homer"
Advertisement:

Pretty much any training program for spies, assassins and related Cloak and Dagger types. The primary purpose is to train new spies, but some spy schools might also include further training for experienced agents. Sometimes an experienced agent might retire from the career and become a trainer, or might be invited to be a guest lecturer from time to time.

Most spy schools are for adults, although there is a growing genre of series like CHERUB and Spy High that depict schools with university age, teenage or even preteen students. Such schools may be the origin of the Teen Super Spy.

The exact training program varies greatly, but most include a wide variety of espionage, commando and generally unconventional dirty trick training. Some are Mildly Military, and many programs emphasis martial arts and weapons training to equip their agents to be an Action Hero. However, most give foremost importance to the ability to think outside the box, interact with people, and be a well-rounded Guile Hero. The school might have classes oriented toward being a Master of Disguise and a Cunning Linguist.