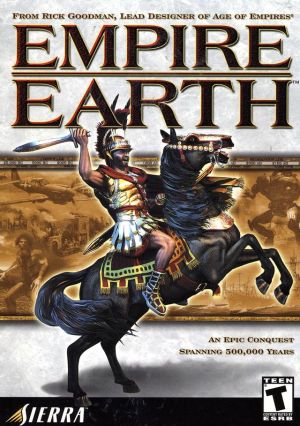 A classic military, real-time strategy game from Stainless Steel Studios, Empire Earth was released in 2001 for the PC.

Similar to Emsemble Studios' Age of Empires, the player controls a civilization as it advances through "epochs" from the Stone Age to the Robotics Age with the Space Age added in the Art of Conquest expansion. Specific buildings allow the construction of units and the research of improvements. The game employs a complex technology tree, with literally hundreds of land, sea, and air-based units. The goal, outside the preset scenarios, is the military destruction of the opponent or the construction of Wonders (Big historical monuments). Users can play against the computer or other players online.

The original was very well received, prompting the release of Empire Earth II in 2005. That also did fairly well.

Empire Earth II changed the formula in favor of territory management and tech points obtained from universities and temples that are used to upgrade your civilization's military, economy and infrastruture to advance to the next epoch. A year later it received an expansion titled Art of Supremacy that includes three new campaigns, two African civilizations and some new skirmish/multiplayer options and modes.

Empire Earth III (2007), by contrast, was a commercial flop, and is widely believed to have been the end of the series.

A dedicated fanbase lives on.