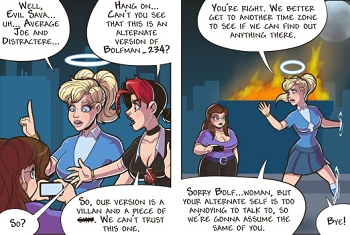 "It matters not if she is the reincarnation! She was to be crucified! To slowly and painfully rot away!"
— Chirizuka Kaiou, Ayakashi Triangle
Advertisement:

A character does something worthy of punishment, but an alternate version, personality, clone or even past self (usually innocent or ignorant of the other's crimes) gets punished for it. Bewildering Punishment may ensue if the alternate self truly has no idea what they're being blamed for. Don't count on them causing the Death of Personality for the guilty one, because that may not always be possible.

Related but distinct from Cartesian Karma, when someone is held accountable for crimes they "committed" because they were mind-controlled. Just as likely to be boiled down to Moral Luck.