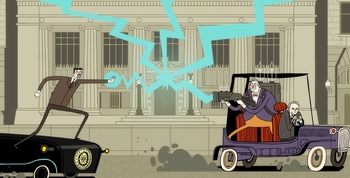 Historical Domain Characters tend to get thrown around in fiction, even if it's not a Period Piece. This may have something to do with the fact their stories (or at least the basics) are interesting and thus would lead to them either having a role (of any relevance) in the story or just as a one-off gag.

However, they tend to be subject to getting a Historical Hero Upgrade or Historical Villain Upgrade in general, usually from a form of Artistic License – History. Sometimes you throw in a Historical Badass Upgrade to that one king who was best known for diplomacy and make him lead his armies to battle or make Abraham Lincoln a vampire hunter.

But what if that's not enough for the Rule of Cool? Then give them superpowers. Essentially, this trope is about historical figures (or those heavily based on them) but with supernatural abilities that can be anything (or maybe loosely based on what they're best known for or stereotypes around their nationality). These superpowered historical figures don't even need to be part of a Historical Fantasy to qualify, they can even exist in the modern-day! (When modern-day figures are the ones with powers, it’s Celebrity Power.)

A Sub-Trope of Historical Badass Upgrade and Beethoven Was an Alien Spy. A Super-Trope to Demon King Nobunaga and Julius Beethoven da Vinci. Could also lead to Weird Historical War and Archived Army (where historical figures team up to fight).