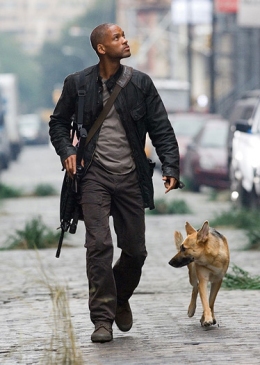 I Am Legend, and this is my dog.
Advertisement:

A dog who travels with a character wherever they go, and traditionally known as "man's best friend". This may be anything from a Mister Muffykins or a Right-Hand Attack Dog to a Precious Puppy or a Non-Human Sidekick. If you're lucky, your Post-Apocalyptic Dog will be one of these, and not a Super-Persistent Predator dog hunting you down.

Unlike Heroes Love Dogs, the dog owners in this trope don't necessarily need to be good guys; when they are the villains, they are always subjected to literal Pet the Dog moments, and the villainous dogs will still always have Undying Loyalty to them.

A sufficiently cute dog, however, will make the mood even better, be it a cute big dog or a cuddly small dog, because Cuteness Equals Goodness.

Often called upon for Urine Trouble or other Toilet Humor jokes.

It's not limited to dogs; a Noble Wolf or a Fantastic Fox can count as one if they accompany their owner. Of course, more-menacing bad guys will also happen to have more evil canine companions, such as a pack of Savage Wolves, or a gigantic Hellhound.

A Sub-Trope of Precious Puppy, Heroes Love Dogs. See also A Boy and His X and Right-Hand Attack Dog.