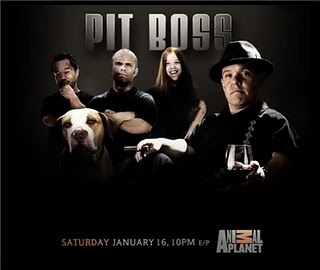 Shorty and his crew, doing what they do bestnote From left to right: Ronald, Hercules, Sebastian, Ashley, and Shorty.
Pit Boss is a show on Animal Planet that aired from 2010 to 2013.
Advertisement:

This show stars Shorty Rossi, an ex-con little person who runs a Hollywood California talent organization called Shortywood with his equally little employees Ashley, Ron, and Sebastian. Along with managing talent, Shorty also runs Shorty's Rescue, which is an organization dedicated to rescuing pit bulls and lessening their reputation as a "vicious" breed.