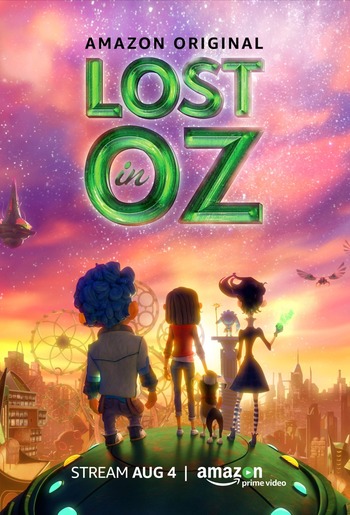 Lost in Oz is an All-CGI Cartoon commissioned by Amazon Studios for Prime Video and animated by Polygon Pictures (with Arc Productions for the pilot), loosely based on The Wonderful Wizard of Oz. As in most versions of the story, the plot follows Dorothy Gale as she gets whisked off into the Land of Oz by a tornado. Unlike the source material or most other adaptations, the tornado isn't exactly a freak act of nature, but is a spell unwittingly cast by Dorothy, using a book found underneath the floorboards of her house. Oz itself is also quite a bit different, with the Emerald City renvisioned as a Magitek driven metropolis. Oh, and Dorothy quickly befriends a jaded young witch named West...

The pilot originally was released in 2015. The series was picked up with an extended pilot (a Compilation Movie of the first 3 episodes) debuting in 2016, the full first season dropping in August 2017, and the second season released in June 2018.

Not to be confused with the 2002 live-action pilot of the same name.