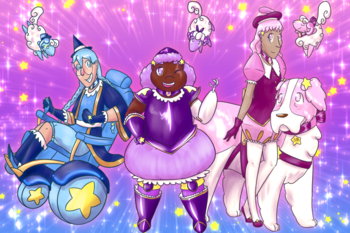 Sweet Dreams or occasionally Sweet Dreams: Defend Against Nightmares is a webcomic by Claire Greenhalgh about a trio of Magical Girls going about their daily lives in their hometown, and fighting the Nightmares that show up every night after the sun sets. It started on New Year’s Day 2018, with an increasingly infrequent update schedule. It currently seems to be on hiatus. It used to be hosted on Tumblr but has since moved to ComicFury and can be read here.

Not to be confused with Aaron Patterson’s 2008 thriller novel.