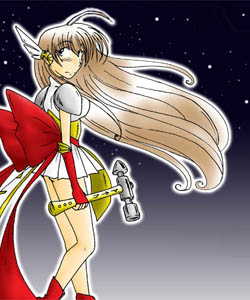 Never send a man to do a girl's job... unless you change him into a girl first.
"Repeat after me: Despite what magical girl anime has taught me, the monster does not go down with the first strike."
— Hermod, Messenger of the Gods
Advertisement:

Sparkling Generation Valkyrie Yuuki is a transformation webcomic by Kittyhawk, and is a shameless parody of the Magical Girl genre — namely, the main character has been hit with a Gender Bender and now must fight evil with a phallic-shaped smiting hammer in the hopes of getting his manhood back.

Updates infrequently, but provides a whole episode with each update. Updates news about convention tours and merchandise far more frequently, if you're interested! (Although Kittyhawk has also started to do semi-regular sketch parties, so there's that.)

This ain't no Sailor Moon, that's for sure.

A mirror of the comic can be found here

Now has a Character Page in much need of help. Please make sure to add character tropes there instead.