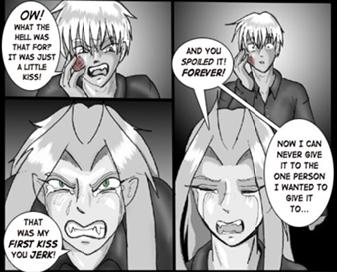 DOUCHE!
Mai: Who are you, anyway?
Mikoto: I'm Mikoto!
Mai: I know that! Ugh... how could I have given up my first kiss to this girl?
Mikoto: Fine! I'll give it back! [she kisses Mai]
— My-HiME Episode 1 Post-Episode Trailer
Advertisement:

This is a Japanese cultural trope. Whether they're a boy or a girl, a Japanese teen's first "adult" kiss on the lips is a momentous occasion. It is something to be built up to and shared with a very special person — something that is remembered for the rest of one's life. A spoiled or stolen first kiss is an occasion for profound angst and even anger. Consequently, in any anime plotline involving teen romance, the first kiss is an important milestone in the development of both self and relationship.

This is mostly because, unlike most Western countries, where kissing is between moderately special and outright mundane, kissing is seen as an extraordinarily intimate act in Japan, almost comparable in intimacy to sex in the West. It is not done in public (anime characters who do kiss in public are either shameless, extremely daring, Eaglelanders, or censored from the audience's view), and parents do not kiss where their children can see them. In effect, the first kiss is the harbinger of a teenager's entry into sexual maturity.

Immature characters will be hesitant to even share drinks or do CPR on someone, for fear that this counts as an Indirect Kiss.

This attitude does exist in the West to some degree, but it is not nearly as significant as it is in Japan, especially for boys. Western culture has the first kiss as a proud "rite of passage" and sometimes a cause for celebration even if it was with a complete stranger. See First Kiss, the parent trope, for more info.