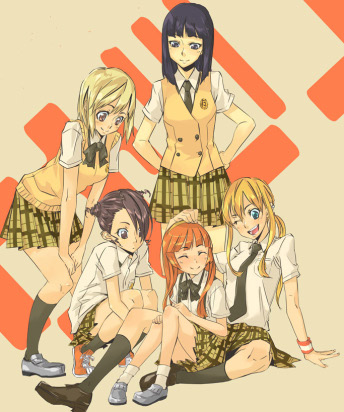 An small part of the crew: Tatsuki, Torako, Hitsugi, Suzume and Ayumi
Advertisement:

Kamizono Academy — this is where four freshmen meet up by pure chance. Torako Kageyama, Suzume Saotome, Tatsuki Iizuka and Ayumi Nonomura — their misadventures, along with a colorful support cast, are what this series is about. A unique brand of humor is present throughout.

Hyakko is a comedy Slice of Life manga by Haruaki Katoh that started serializing in 2006 on Comic Blood magazine. A 13 episode anime adaptation was broadcast in 2008 by Nippon Animation.

Is currently on hiatus as Haruaki Katoh was working on Abnormal Kei Joshi under the alias Juichi Sanada, though now that's on hiatus too and has been since 2015.