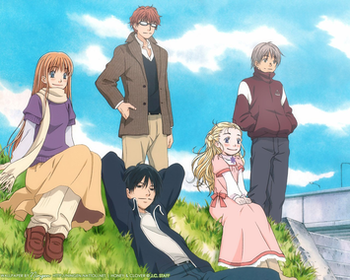 Honey and Clover depicts the lives of the students of an art college in Tokyo. It centers mostly around three young men, Yuta, Takumi and Shinobu, who live in a run-down apartment complex and who have become very close friends.

One day one of the art professors introduces Hagumi (Hagu), his cousin's extremely talented daughter from the countryside. Hagumi looks very young for her age and is shy toward strangers, which doesn't prevent Yuta and Shinobu from falling in love with her immediately. Both boys are awkward in their ways of showing their affections though, which leads to a very delicate love triangle.

Takumi also finds himself in love, this time with an older woman, while another student, Ayumi, in turn is in love with him. This love triangle actually gets the most attention at first, emphasizing the hopelessness of both people's unreciprocated feelings and leading to much of the drama during the first series.

Honey and Clover started out as a josei manga series created by Chica Umino, serialized in various magazines from 2000 till its ending in 2006. It has been adapted into two anime series. A live action movie adaptation has been released in 2006 and two TV dramas (in Japan and then Taiwan) started airing in 2008. Yes, it's that popular.

Ya gotta admit, that is one of THE cutest sounds to accompany this trope!

Ya gotta admit, that is one of THE cutest sounds to accompany this trope!