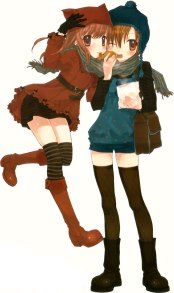 Mitsu is a Cute Clumsy Girl with a huge crush on fellow schoolgirl Madoka, so much so that she's been secretly stalking her. One day she finally gets the nerve to talk to Madoka but gets hit by a bus and dies while carelessly rushing towards her.
Advertisement:

Poor Mitsu is now a ghost and no humans including Madoka can see her. However, now she can go back to being a Stalker with a Crush and with her new powers, become an even better one to boot! Heck, with her new powers she can now drive off anyone who comes too close to her beloved Madoka!

All goes swimmingly until New Transfer Student and lesbian Kyouko appears. Kyouko was a childhood friend of Madoka and wants to fulfill the Childhood Marriage Promise the two shared. Mitsu has even more to worry about as Kyouko has the ability to see ghosts!

Honey Crush is a Manga by Asu Tsubaki, who is perhaps better known as the artist of He Is My Master. Serialized in Yuri Hime S from 2007 to 2010, the work is an irreverent and comedic mixture of Girls' Love with the supernatural.