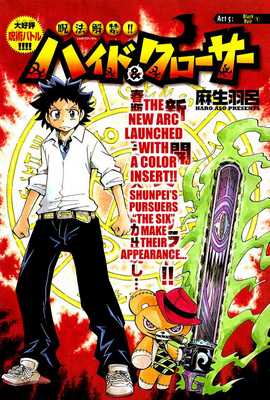 Magic and killer teddy bears, nice mix!
Men aren't people who spend all of their time thinking of themselves, ya know.
Advertisement:

Thirteen-year-old Closer Shunpei, commonly called Shun, is not exactly what you'd call a prodigy. In fact, he is a klutz, and a coward to boot. He is fully aware of this, but doesn't really have the motivation to do anything about it. That is, until a living monkey doll attempts to kill him, saying that if he is killed, any magician who kills him will be granted immense magical power, because as it turns out, he is the grandson of one of the most powerful mages in the world. However, even though Shun is now the target of nearly all the magicians world-wide, he is not alone; his teddy bear, Hyde, comes to life in order to man Shun up for the challenge ahead, and to top it off, Hyde's magic weapon is a chainsaw stuffed inside of him called Texas Chainsaw.

Hyde and Closer (Juhou Kaikin!! Haido ando Kurōsā, literally Magical Ban Removal!! Hyde and Closer) is a shonen manga by Haro Aso, which ran from 2007 to 2009 (originally starting in Weekly Shonen Sunday, but it moved to Club Sunday in 2008 and continued there until its conclusion). It was licensed in English by Viz Media.