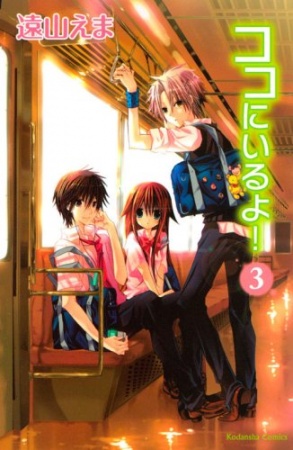 I Am Here! (Koko ni Iru yo!) is a shoujo manga series by Ema Toyama. The manga was serialized in the shojo manga magazine Nakayoshi from 2007 to 2009, with five volumes released by Kodansha under the imprint Kodansha Comics.

Hikage Sumino has zero presence. None of her classmates appear to notice her, and it seems as though she'll never make friends. She's constantly in the shadows, and her only source of contact is blogging, where she is Himawari and her online friends Black Rabbit and MegaPIG cheer her on to make new friends. Black Rabbit assures Hikage that she can change her world, but Hikage isn't so sure.

But when she starts getting noticed by Hinata Mutou and Teru Mikami—the two most popular boys at her school—Hikage might finally be able leave the shadows and take her first step into the sunlight...

Tropes that appear in I Am Here!