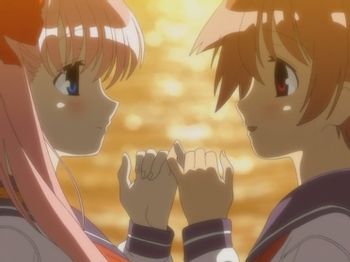 Pinky swears are used as a way to form a pact or as a declaration of friendship between children. While the practice is considered cutesy and juvenile to older persons, children often take this kind of gesture seriously, as if their very lives, or worse, friendships, hang in the balance of words spoken over interlocked fingers.

Usually this gesture is accompanied by a rhyme or "oath" spoken in unison by the pinky swearers. This can vary by region.

While North American children tend to use the chant "Cross my heart and hope to die, stick a needle in my eye," Japanese schoolchildren use the following "oath":

"Yubikiri" means literally "finger cut", likely because of the timeless punishment of cutting off a finger if you fail or break a promise or contract (still practiced today amongst some yakuza and other gangsters), so the last bit of the promise is literally "our fingers have been cut!" to seal the deal. Also, the term hari senbon, while meaning literally "1,000 needles", is also a regional slang term for a pufferfish, which is covered with 'needles' when inflated. So, they could also be promising to make you drink a puffer fish, which obviously would be painful, followed by a rather nasty death by neurotoxin.

Russian children, too, use a similar pinky finger gesture when promising to be friends and no longer fight. The chant for this occasion can be roughly translated to English as the following: "Make peace, make peace, make peace, and don't fight anymore, and if you fight, I'll bite, and biting is not enough, I'll beat you with a brick... we cannot beat with a brick, we are friends now!"

In Australia (and perhaps elsewhere) there is an understanding that if the pinky swear is broken, the one who broke it has their pinky finger broken in turn.

A common variation is for an adult to make a "pinky promise" to a child as reassurance. Either at the child's request or to show that the adult understands how children feel. May end up as a Heroic Vow. Commonly subverted into a Kick the Dog moment by having the villain use a child's trust in the pinky promise to trick them. Especially cruel villains may even mock the child for their gullibility after revealing their true motives. Unless the power of the pinky promise makes him do a Heel–Face Turn.

A cousin to this trope is the Red String of Fate; which is connected by pinky fingers.

See Yubitsume for when a character goes through with it and cuts off their finger.