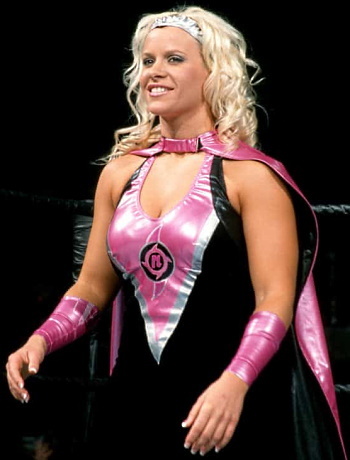 As Mighty Molly
"Molly Holly, you are something else!"
— Jerry "The King" Lawler, WWE SmackDown, November 9 (taped November 7), 2000
Advertisement:

Nora Kristina Greenwald(born September 7, 1977 in Forest Lake, Minnesota) is an American professional wrestler and referee who debuted in 1997 for the World Professional Wrestling Federation as Starla Saxton. She went on to work for both WCW and WWE, best remembered for her six year run in WWE under the name Molly Holly (2000-2005). She is a New Dimension Wrestling Women's Champion, a 2x WWE Women's Champion

and a 1x WWE Hardcore Champion