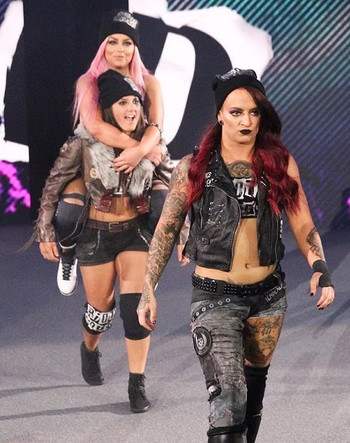 "We win, we riott!"note From left to right: Sarah Logan, Liv Morgan (on top of Sarah), Ruby Riott.
Advertisement:

The Riott Squad was a Professional Wrestling Power Trio composed of Ruby Riott, Liv Morgan and Sarah Logan. The trio is signed to the WWE and debuted on November 27, 2018, in the fallout episode of Smackdown after Survivor Series 2017; they would perform in the brand until the 2018 Superstar Shakeup, where they went to the Raw brand, where they performed as a trio in a variety of feuds. The Superstar Shakeup of 2019 sent Liv to the Smackdown brand, effectively breaking the trio. The draft then brought her back to Raw. Split as a power trio when Sarah Logan was released in 2020, then as a tag team when Ruby was released in June 2021.

We Trope, We Riott!!

open/close all folders
In general
Ruby Riott
See her individual tropes here.
Liv Morgan
See her individual tropes here.
Advertisement:
Sarah Logan
Sarah was born as Sarah Bridges on September 9, 1993, at Louisville, Kentucky, United States. Like most of the New Era wrestlers of the 'E, she piled her craft on the indies, under the name Crazy Mary Dobson, being trained by Mad Man Pondo, Mickie Knuckles and TAKA Michinoku, and debuting on November 8, 2011 for IWA East Coast she also has stints on Insane Championship Wrestling, SHIMMER, Ring of Honor and Juggalo Championship Wrestling. Her resume includes 1x RPW Women's Champion, 1x APWA World Ladies Champion and 1x JCW Tag Team Champion (w/Mad Man Pondo). On April 15, 2020, she was released by WWE, along with dozens of other wrestlers and staff as part of cost-cutting measures. Outside of wrestling, she married her co-worker Raymond Rowe of War Machine/War Raiders in 2018, and they're expecting their first child in 2020. You can find more of her on That Other Wiki