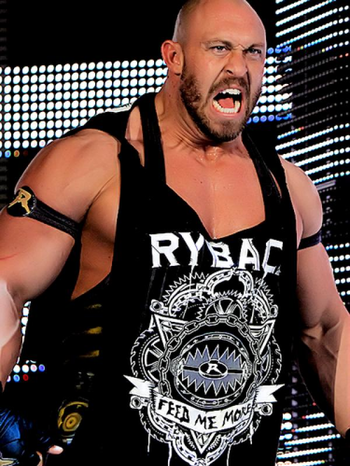 FEED! ME! MORE!
"Ryback's so bald you can see what's on his mind, and what I see is destruction."
—Jerry Lawler, WWE Raw
Advertisement:

Ryback Allen Reeves (born Ryan Allen Reeves; November 10, 1981) is an American professional wrestler, best known for his tenure with WWE under the ring name Ryback. One of the eight finalists on WWE Tough Enough 4, Reeves later signed a developmental contract with WWE and wrestled in its developmental territories Deep South Wrestling (DSW), Ohio Valley Wrestling (OVW), and Florida Championship Wrestling (FCW). He participated in the first season of WWE NXT in early 2010 under the ring name Skip Sheffield, and joined the main WWE roster later that year as part of The Nexus before being sidelined due to injury. Following his return as Ryback, he was portrayed as an unstoppable powerhouse who would squash two people at a time, and headlined several pay-per-view events for WWE – some of which were for the WWE Championship – and became a one-time Intercontinental Champion before departing from the company in 2016. He wrestled on the independent circuit from 2016 to 2018.