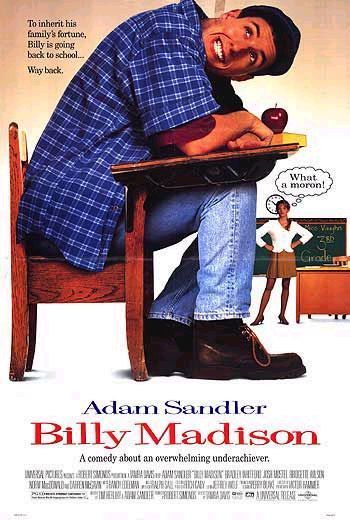 "...Mr. Madison, what you've just said is one of the most insanely idiotic things I have ever heard. At no point in your rambling, incoherent response were you even close to anything that could be considered a rational thought. Everyone in this room is now dumber for having listened to it. I award you no points, and may God have mercy on your soul."
— The Principal to Billy...for giving an incorrect answer.
Advertisement:

Billy Madison is a 1995 comedy film starring Adam Sandler as a dimwitted rich slacker who must go Back to School, starting with first grade, all the way through high school, in order to inherit his father's (Darren McGavin) company. He falls in love with Veronica Vaughn (Bridgette Wilson), his beautiful 3rd grade teacher, along the way. Hilarity Ensues.