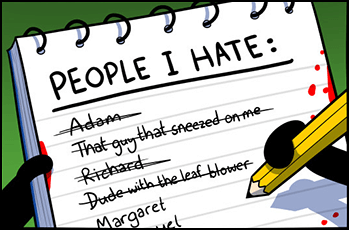 "I never thought I'd have so many enemies that I'd need to make an actual list but it's just getting to be more than I can keep track of. I mean what the hell, it worked for Nixon, should work for me right?"
— Gordon Freeman, Freeman's Mind
Advertisement:

A character is making a list of people they don't like. This list doesn't have to be shown, nor does what they plan on doing with those people ever have to be said.

Compare Rogues Gallery, the out-of-universe version, and Gotta Kill Them All. Compare Listing the Forms of Degenerates.