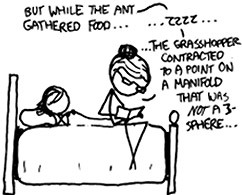 When a character tries to recount an anecdote or tell a story, usually related to the situation their friends are experiencing, they will get carried away with unnecessary exposition and go off in absurd and comedic tangents. By the time they have reached the ending, the intended moral or theme of the story is lost.

The Cloudcuckoolander is often prone to this. May overlap with No Sense of Humor.

Compare Metaphorgotten, Ice-Cream Koan, Disorganized Outline Speech. Also compare Fractured Fairy Tale, in which it's due to the author's deliberation, and Sidetracked by the Analogy, when it's the listener who takes the meaning of the story off its course.

Contrast "Shaggy Dog" Story, where the story does go somewhere— it's just not impressive once it does.

open/close all folders
Anime & Manga
Comic Books
Films — Live-Action
Then, while running, he crosses path with the dead gazelle and says to himself 'why am i running? Might as well stop there and take a bite.' [Giovanni and Giacomo are even more appalled] Anyway, what's my point? [visibly confused] It doesn't matter... if you're an armadillo... or a peacock... What's important is... if you die let me know in advance.
Advertisement:
Fan Works
Literature
Live-Action TV
Music
Puppet Shows
Radio
Theater
Video Games
Web Comics
Web Original
Western Animation
Feedback

How Lola Broke Her Leg

How Lola Broke Her Leg