Sidetracked by the Analogy 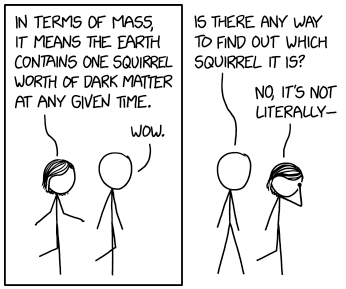 Dilbert: We can either wait three months for the software committee to approve our plan or we can soar like eagles, and act without approval, saving millions of dollars!
Dilbert: (thinking) Please don't be sidetracked by the analogy.
Pointy-Haired Boss: Since when do eagles use software?
— Dilbert
Advertisement:

To a character who is Literal-Minded, a Cloudcuckoolander, or maybe just a little dim, or even a combination of all three, using analogies and figurative language is a bad idea. This is because in any given metaphor, there are several different things that a person can latch onto, but only one of these is intended to actually make the connected point. And unless the connection is made right away, everyone can end up discussing an entirely different tangent than what they were supposed to be discussing. Someone will eventually have to stop the new discussion in hope of returning to the original subject.

Suffice to say, this is Truth in Television, to the point that one of the best identifying marks of a good leader is that he can keep a conversation focused on a single topic without having it go off into completely irrational directions.

Compare Derailed for Details. Could also be seen as the conversational variant of a Wiki Walk, where starting with one topic leads to dozens of completely unrelated topics with only tangential connections.

Sister trope to Analogy Backfire. Compare Metaphorgotten, where the speaker themselves gets sidetracked. See also Derailed Train of Thought and Comically Missing the Point.

Upon picking Quincy Leeds as her next target, Bitsy refers to him as her new puppet to shove her hand up. Helen is disgusted by this metaphor because it sounds dirty.

Upon picking Quincy Leeds as her next target, Bitsy refers to him as her new puppet to shove her hand up. Helen is disgusted by this metaphor because it sounds dirty.