Just For Fun / The Ugly Barnacle 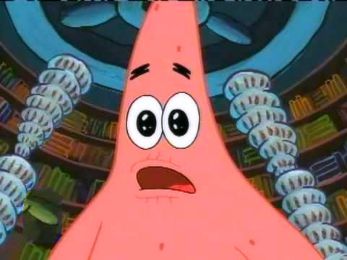 The most unforgettable scene from The Film of the Book.
Patrick Star: "Once, there was an ugly barnacle. He was so ugly that everyone died. The end."
SpongeBob SquarePants: [Beat] "That didn't help at all!"
— The story.
Advertisement:

The Ugly Barnacle is a classic Short Story in the Pacific Literary Canon, the authorship of which is generally attributed to one Peter F. Patrick (then using the pen name "Patrick Star"). According to legend, "Star" improvised "The Ugly Barnacle" in an attempt to cheer up a friend who believed himself to be suffering from a case of The Ugly or The French Disease as it was then known (the two later realized that the friend actually had a bad case of halitosis after eating a homemade "sundae" of sorts.) Unfortunately, the tale failed to console him in any manner whatsoever.

Despite the fact that Barnacle failed to accomplish its initial and indeed primary goal, it eventually found its way to the intellectual community of the Département Bikini des Basses Terres. There many came to hail the story for its harsh realism, innovative use of minimalism, and detailed characterization. Slowly but surely, the story came to spread from its cradle within the nurturing environment of the Bikini des Basses Terres (where it was subject to some refinement, the story as most know it in fact being the Third Edition) to grace the entire world with its compelling narrative and execution.

An animated film adaptation of the tale, also titled The Ugly Barnacle, was produced in 2000. Unusually, the movie is both a Film of the Book and a Biopic, as it focuses on both the legendary story and the events surrounding its creation. The film managed to avoid many problems commonly faced by page-to-screen adaptations, a fact which many critics attributed to P.F. Patrick's extensive personal engagement with the film-making process, and the script-writing and casting+design in particular. Experience this work of art here, albeit dubbed over in English,

and now in Venezuelan Castilian

Compare to "Hemingway's Six-Word Story", another tale famous for its ultra-minimalist prose, as well as Spike Jonze and Charlie Kaufman's Adaptation for a similar approach as The Film of the Book.

You just read 140 tropes on a joke from SpongeBob SquarePants. Good job wasting a good 15 minutes or more.

Patrick tries to cheer up SpongeBob over his supposed ugliness with a story about an ugly barnacle. To say it didn't make SpongeBob feel any better would be a gross understatement.

Patrick tries to cheer up SpongeBob over his supposed ugliness with a story about an ugly barnacle. To say it didn't make SpongeBob feel any better would be a gross understatement.