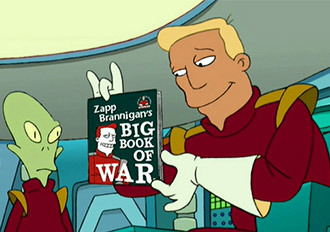 "A good soldier obeys without question. A good officer commands without doubt."
— The Tactica Imperialis, Warhammer 40,000

In Real Life, there's no easy answer. In fictionland, however, you can just ask the Big Book of War.

A specific type of Fictional Document (and occasionally Encyclopedia Exposita), the Big Book of War is an oft-quoted, but rarely seen in its entirety, book or code which some military (mildly or otherwise) or other group follows. In addition to providing strategies for battle (and occasionally diplomacy), it frequently alludes to some kind of moral, chivalric code which its adherents are supposed to follow. Characters will frequently recite passages or rules from it when faced with some dangerous situation or conundrum. A Rules Lawyer may insist on "sticking to the code" no matter what happens, while a Military Maverick is more likely to shout "screw the code!" and do things his/her own way. The book in question might be Sun Tzu's The Art of War but is at least as likely to be entirely fictional and specific to that organization.

Other organized groups, from ninjas to pirates to Girl/Boy Scouts to bands of space traders, frequently have their own codes that work the same way. Regardless of what it serves, it frequently has all the answers you need, right when you need them. It also makes an excellent citation source for your Badass Creed.

It can be Played for Laughs if a character tries to appear knowledgeable by quoting a rule, only to be corrected by someone else that he picked a completely wrong section of said document.

A subtrope of the Great Big Book of Everything. May be quoted from and result in a Sparse List of Rules.

Only remember that the rules and ideas described in the Real Life section of this trope are meant for the battlefield and do not always help a person in social situations and may make you seem like a Jerkass or Magnificent Bastard, when compromise and politeness will get you much farther. After all, some strategies originally designed to deep-six your opponents certainly may be out of place in dealing with friendships and neighbors.