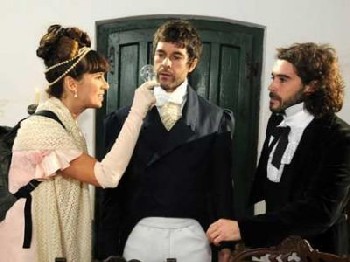 María, Diego and Axel prevented the villain Ronco Milevich from giving light bulbs to the 1810's Argentines.
Los Únicos (in Spanish, "The Uniques") is a superhero TV series from Argentina (with two seasons so far, 2011 and 2012). It features a team of secret agents with super powers, which is actually the Argentine brach of an international organization of similar teams around the world. The main characters of the first season were Alfredo Monterrey, Diego Rouvier, Axel Etcheverry and María Soledad Marini. Alfredo was the chief and (unrevealed at first) María's father. María and Diego were the main couple, although Rosario Ahumada was the third in the love triangle. The main villains were Ronco Milevich and Livio Muzak. A third one, Dreyfus, would come later.
Advertisement:

Several younger agents were introduced to the team, and others left it. In the last episode of the first season, Dreyfus tried to kill the Unicos with an atomic bomb, but he only gave them new powers. He also organized a group of super villains.