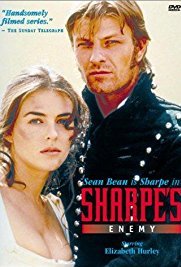 Portugal 1813
Wellington rests his army prior to resuming his offensive against Napoleon.
But in the No-Man's Land between the two armies,
the mountains of Northern Portugal.
other forces are still active...
Sharpe and his Chosen Men are sent to retrieve the wife of a British general from an army of British, French and Portugese deserters led by Sgt. Hakeswill.