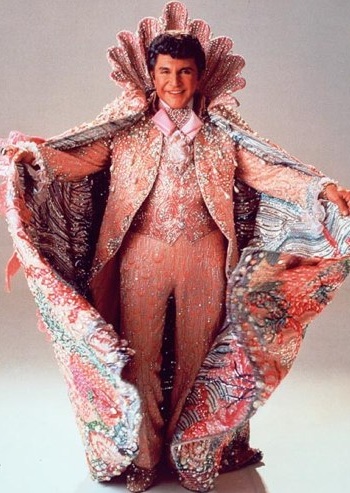 One of his more modest capes.
Advertisement:

Now how decorated a cape can be will vary. It can be trimming just part of the cape, to lining it, to entirely covering it. What is decorating the cape can also vary. Realistic capes can be decorated with Fur, embroidery, gold lame, and even expensive dyes can count. Fantastic capes can decorate them even more, from armor, to fire, to Tron Lines.

You might think pimping out a cape would be easy, but capes are a lot of material to work with, and even just edging one will take several yards of trimming. And of course historically all the decoration was done by hand. Thus anytime you see a cape where there is some kind of fancy trimming, lining, decoration, or other kind of work done, it counts as this trope.

If this cape is worn for protection, it overlaps with Stylish Protection Gear. If royalty or nobility wears one, it usually is part of their Requisite Royal Regalia (and why the trope Ermine Cape Effect is named so).

Now let's make it clear that the cape itself has to be decorated. So even though Superheroes Wear Capes, the majority of their capes will not count as this trope (even for the villains), as those capes are usually simple, no matter how cool or flowing they may be.

Often part of an ensemble with a Pimped-Out Dress and/or a Nice Hat (and they might even all match).