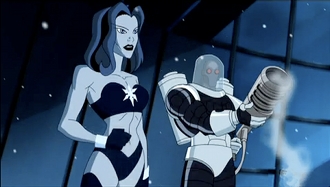 She isn't cold in that, she is cold in that.
"We wear fur coats, in the Summertime. So ice cold, that we don't mind!"
— Hooligans Never Say Die
Advertisement:

When a character is An Ice Person, has a Freeze Ray, or uses other means to Kill It with Ice, he tends to go one of two ways when it comes to costuming, wearing either a properly warm arctic suit (in a lovely blue/black/white color scheme), or a... bathing suit?

Why the opposite extremes? Well, getting decked out for cold weather makes sense when the cold-wielding character is still a warm-blooded person, so it provides insurance against being hoisted by their own petard. However, if they happen to be an Elemental Embodiment of Ice/Cold, then there's no need for protection from the elements, so they can cavort around in summer beach wear during a cold spell. Interestingly, just because he or she doesn't need to wear cold protection gear doesn't mean they won't indulge in an excuse to be Pretty in Mink!

Special mention goes to characters who wear heat proofing gear to avoid overheating or being melted by Elemental Rock–Paper–Scissors savvy foes, as Mr. Freeze demonstrates in the page image. Ice suits also tend to be blue because Blue Means Cold.

Do not confuse with Impossibly Cool Clothes, though there may be some overlap. Also not to be confused with Elemental Armor, which would involve the character actually wearing ice as their clothing.