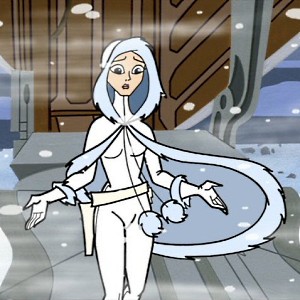 Amidala, a beautiful clotheshorse, even in extreme conditions.
Ilene: I found your hat, Anna.
Dick: Would it have been that bad if you lost it? It's just one defense.
Mary (Anna's player): But the ermine lining gives it plus three in cold resistance.
— Knights of Buena Vista
Advertisement:

A character known for style is getting into a situation that requires some protection but protective gear in Real Life just isn't fashionable. And sometimes the writers are aware that the character has to wear some kind of protective clothing, so they go with pimping that gear as much as possible.

The actual situation requiring protection doesn't matter. It could be extreme cold, extreme heat, or wading through toxic chemicals. What matters is that the protective gear looks like plausible protection, but is still nice to look at.

It can overlap with Impossibly Cool Clothes, depending on how convincing the outfit is at looking like it protects. More often, this overlaps with Impractically Fancy Outfit, but not always.

A Super-Trope to Environment-Specific Action Figure and Latex Space Suit.

Compare Pretty in Mink (when it's worn for warmth, as well as style), Bling of War, Pimped-Out Dress, Happy Holidays Dress, Scary Impractical Armor, An Ice Suit, Pimped-Out Cape, Battle Ballgown and Kicking Ass in All Her Finery.

Contrast Stripperific, Exposed to the Elements, Chainmail Bikini and Pelts of the Barbarian.