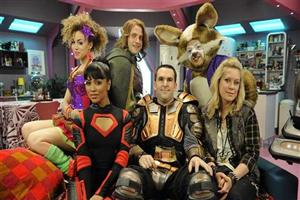 "This is The Console. Pixelface Games now loading..."
Advertisement:

Set in the imagined world inside a games console, Pixelface is a CBBC sitcom spin-off from the sketch show Sorry, I've Got No Head. The show follows the on-and-off-screen lives of a group of computer game characters, each from a different genre. There's Aethelwynne, a questing elf; Claireparker, a zombie battling waitress; Rex Dynamo, a marsupial hybrid who collects apples; Sgt. Riley, a space marine; Lady Alexia Alderton, a glamorous legend hunter; and Kiki Nova, an incredibly upbeat and enthusiastic dance star. Pixelface shows the characters waiting to play their game and reacting when their console is invaded by the likes of an evil bug or a Premiership football team.