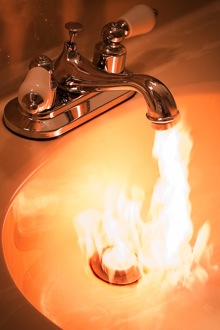 "When I flush the john, then your shower goes on!"
— "Weird Al" Yankovic, "The Plumbing Song"
Advertisement:

A D.I.Y. Disaster is when a device's faulty nature is shown by the fact that when a button is pushed or a lever is pulled that is supposed to do one thing, it does something else that a different button or lever is supposed to do, such as a car's window button activates the windshield wipers. It's frequently used after someone has tried to repair or modify the device in question to show their mechanical ineptitude. In spite of the name, this doesn't need to be the result of a botched do-it-yourself job; the device could be wired that way on purpose, for example. There's also a variation where the electricity and plumbing (and sometimes the gas) get mixed up, so you get water coming out of the lightbulbs or some similar mix-up. Doesn't make the slightest bit of sense, but Rule of Funny applies.

Not to be confused with What Does This Button Do?, where a person's inexperience with the device in question, rather than the device's faulty nature, causes the unexpected result. If a person doesn't know what a button does and presses it anyways, something unexpected happens, and hilarity ensues, it's What Does This Button Do?. If the button is supposed to do one thing, but when pressed, does another, it's a D.I.Y. Disaster.

Similar to Wiper Start, although a D.I.Y. Disaster is the result of the design of the car, not the incompetence of its operator. One of the worst results that can come about from Doom It Yourself or a Do-It-Yourself Plumbing Project. Almost always Played for Laughs.