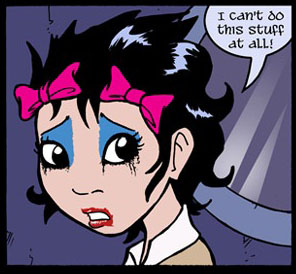 Yes, we can see that.
Advertisement:

The Path to Manhood has many obstacles. To prove his worth, a youth may have to complete the Training from Hell, avenge the deaths of those dear to him, carve some notches on his bedpost, wrestle a bear, or become embroiled in a "manly project" predestined to go wrong.

The path to womanhood, on the other hand, at least since the 1920s, seems limited to the correct application of hair products or... makeup. Frankly, sometimes you're better off with the bear-wrestling.

This is a fairly common plot in works aimed at a pre-teen/young teen audience. A girl will decide that she needs to change her look and that a complete makeover is the only way to do it. The occasion might be prom night, going on her first date, attempting to land a date, the dreaded school photo, or even just proving that she's a young woman, not a child. Whichever it is, she has her heart set on using "grown-up" cosmetics.

Problem is, she's never used them before. She might even be specifically banned from using make-up/hair dye/curling tongs until she's "old enough". So, she swipes some of her mum's make-up, sneakily buys some hair dye, and runs off to the bathroom for some makeover magic. Which, of course, never quite turns out like she hopes.

Apparently, few people in TV-land think to bite the bullet and ask mum for help, or enlist the assistance of a make-up savvy friend, or even read one of the millions of magazines only too eager to tell girls how to paint their face. Which leaves only trial-and-error as a means of finding the right look, with emphasis on the "error" part. Usually, the girl will also try her new style right before she has to be seen, rather than giving herself enough time to wash off mistakes.

She'll put so much lipstick on that she ends up looking like an evil clown. Eyeshadow and blusher will be laid on so thick that she resembles a Picasso knockoff. She misreads the instructions on the hair dye and ends up with her scalp on fire...or magenta hair...or magenta hair ON FIRE! As for her eyebrows...well, you don't know what you've got until they're gone. She might realize the disaster straight away, or, if the writers are really cruel, she might think she looks great right up until she walks into a room only to have everyone kill themselves laughing at her.

Strangely, the moral of "you look beautiful the way you are" is becoming quite rare...especially as the media steers girls towards the beauty industry at an increasingly young age. Instead, the moral is more likely to be a more standard "obey your parents," since mum will do an "I told you so" as she fights to restore her daughter's hair to some semblance of normality. Which seems a bit warped, really — the message is effectively "don't use beauty products until you're old enough to get a part-time job. Then you can spend all your cash on trying to make yourself beautiful."

Back in reality, make-up is nearly essential in the television set — the nature of the studio lights means that most people will need at least some blusher or foundation just to look "natural." Which can make it a bit tricky to do this plot in a live-action series where the audience has probably realized that the Naïve Everygirl wears foundation and mascara on a daily basis, so why should she screw it up now?

This can happen to older characters too. It's a good way of pointing out the geeky/awkward or Tomboyish girl; either she won't wear make-up at all, or she'll stick with a single look, unlike her more popular or practical colleagues. Expect hilarity to ensue if she decides it's time for a change.

It used to be that the victim of the trope was Always Female. With the increase in beauty products and procedures that are acceptable for men to use, it is no longer, although it probably won't involve makeup, relying instead on tanning, hair alteration, or tooth whitening.

When the Cosmetic Catastrophe is the result of dyeing one's hair, that becomes the subtrope My Hair Came Out Green.

Related to (subtrope of?) Uncanny Valley Makeup. See Inelegant Blubbering for another catastrophe involving cosmetics. Often stems from Femininity Failure. Compare Be a Whore to Get Your Man, which also may be about a girl who is uncomfortable with things like makeup but chooses to try it anyway.

Cleo attempts to "makeover fail" Draculaura. It does not go as planned.

Cleo attempts to "makeover fail" Draculaura. It does not go as planned.