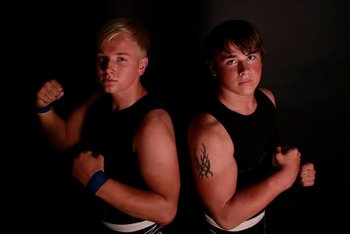 Lorcan Wood and Lewis Wood are two Anglo-Irish professional wrestlers who wrestle as a Tag Team.

They began their careers in 2012, training with Fight Factory Pro Wrestling (alma mater for Becky Lynch and Fergal Devitt). They made their debuts in 2013, wrestling under their real names. Their first major feud was with reigning Irish Tag Team Champions Rough Stuff - a feud that lasted well over a year, culminating in them claiming the titles.

They have been a regular fixture at Celtic Championship Wrestling (where they have also held tag team gold), Irish Whip Wrestling and Pro Wrestling Ulster.

Not to be confused with an American folk band with the same name. The brothers are also members of a band themselves - Our 7 Favourite Drinks