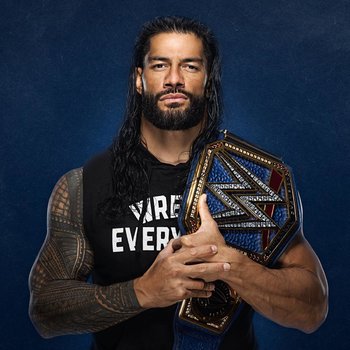 The Tribal Chief.
The Head of the Table.
The Mountain.
"Acknowledge me."
Advertisement:

Leati Joseph "Joe" Anoa'i (born May 25, 1985) is a Samoan-American professional wrestler. A former college Collegiate American Football player for Georgia Tech, then briefly a pro-football player for the Jacksonville Jaguars and Edmonton Eskimos, he signed a developmental contract with WWE in July 2010, and was assigned to Florida Championship Wrestling (FCW), WWE's developmental promotion, using the ring name Roman Leakee. While in FCW, Roman and partner Mike Dalton won the FCW Florida Tag Team Championship off of Corey Graves and Jake Carter in June 15, 2012, before CJ Parker and Jason Jordan won it off them on July 13, 2012. Renamed Roman Reigns when FCW was rebranded as NXT, he debuted on the main roster at the 2012 Survivor Series PPV as a member of The Shield alongside Dean Ambrose and Seth Rollins.

While a part of the group, Reigns was a WWE Tag Team Champion (with Rollins), tied the WWE record for most eliminations in a Survivor Series elimination match with four in 2013, and set the record for most eliminations in a Royal Rumble match with 12 at the 2014 match. After the dissolution of The Shield in June 2014, Reigns became a singles competitor, winning the 2015 Royal Rumble, the 2014 Superstar of the Year Slammy Award, and becoming a three time WWE Champion, a one-time United States Champion, a one-time Intercontinental Champion, and a Grand Slam Champion. He is also a two-time Universal Champion. He won his first Universal Title from Brock Lesnar at SummerSlam 2018 after an indirect distraction from Braun Strowman. On the October 22, 2018 episode of Raw, Reigns relinquished the Universal Championship after announcing that he would be taking time away from WWE to battle leukemia. On the February 25, 2019 episode of Raw, four months after that announcement, he revealed that his leukemia was in remission and he was returning to wrestling once more.

In the lead up to WrestleMania 36, he was going to be facing off against Goldberg for the Universal Title. However, due to COVID-19 and his compromised immune system, he was quietly replaced by Braun Strowman and didn't appear for several months. He finally came back at the end of SummerSlam 2020 by attacking both Strowman and Bray Wyatt after their match, finally turning heel and working with Paul Heyman as his manager, gaining the Universal Champion title for a second time at Payback.

In September 7, 2021, the Pro Wrestling Illustrated magazine declared him the second best wrestler of 2021, behind Kenny Omega, for their annual PWI 500 listing.